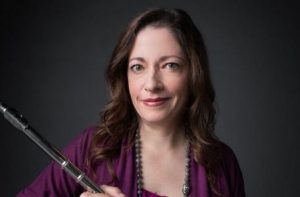 Christina Smith is one of the most sought-after flutists in the country as an orchestral player, soloist, chamber musician, and teacher. The 2020-21 season is Smith’s thirtieth season as principal flutist of the Atlanta Symphony Orchestra, where she holds the Jill Hertz Principal Flute chair, endowed in perpetuity. Smith’s flute solos can be heard on more than 40 ASO recordings. She has also appeared with the orchestra numerous times as a concerto soloist.

She graduated from Interlochen Arts Academy and began her studies at the Curtis Institute of Music as a pupil of the legendary Julius Baker. After just two years in Mr. Baker’s studio, she won the principal flute chair in the ASO at age 20. Smith has also studied with Jeffrey Khaner, Tim Day, and has collaborated extensively with master teacher and clinician Keith Underwood.

Smith has recently appeared as guest principal flutist with orchestras such as the Chicago Symphony, Los Angeles Philharmonic, the Vancouver Symphony, the Baltimore Symphony, the St. Paul Chamber Orchestra, and the Pittsburgh Symphony. She earned critical acclaim while performing on the latter ensemble’s 2010 European Tour.

Equally passionate about teaching, Smith serves on the faculty at Kennesaw State University and maintains a busy private studio. She remains highly in demand to teach masterclasses across the country.

Master-Class is free for performers and observers.

Please tune in to watch!

*** We are having trouble with our registration form. Sorry. ***
Please email the information below to info@clarinettissimo.org

A master class is like a public lesson. Participants perform music for the “master” and get critiques and suggestions that the audience may also benefit from hearing. For example: at Clarinettissimo, a special guest is the master and participants may play orchestral excerpts, solos (with or without accompaniment), or other music. If the master feels there is room for improvement with breathing, finger position, or something else, they will work with the participant to improve, all the while relating this instruction to the audience. Audiences at master classes often take notes.