We’re BACK!! Clarinettissimo 21 will be Live for one day only on Saturday, October 2rd, from 1-8:30PM at Seattle Pacific University. There will be a concert, two master-classes, a workshop on ornamentation, and a community clarinet choir for anyone to play in.

***ALL performers and vendors will be fully-vaccinated. We will require proof of vaccination to attend any event. We ask that you wear a mask over your nose and mouth when not playing your clarinet. Spaces will be well-ventilated.**

Schedule of Events *subject to change*

Your support and donations are invaluable for keeping Clarinettissimo running, and free!   Please consider a tax-deductible donation today.

In this difficult time, we’d also like to acknowledge our long-term supporters.

Winner of the 2017-18 American Prize in Instrumental Performance Sean Osborn has traveled the world as soloist and chamber musician, and during his eleven years with the Metropolitan Opera Orchestra. He has also appeared as guest principal clarinet with the New York Philharmonic, Pittsburgh Symphony, Seattle Symphony, and the American Symphony Orchestra. The New York Times dubbed him “…an excellent clarinetist,” the Boston Globe called him “…a miracle,” and Gramophone “…a master.”

With over forty concertos in his repertoire, Sean has also recorded dozens of CDs for London, Deutsche Grammophon, Sony, Albany, and others, as well as premiering works by Philip Glass, John Adams, John Corigliano, Chen Yi, and Jennifer Higdon to name a few. He has performed at many festivals including Marlboro, Seattle Chamber Music, Aspen, Zagreb Bienalle, Pacific Rims, and Colorado.

Sean has received grants from many organizations, including the NEA and the Aaron Copland Fund. He is also an award-winning composer whose works have been played by the London Philharmonic Orchestra, and members of the New York Philharmonic, Metropolitan Opera, Marlboro Music Festival, and the Los Angeles Philharmonic among others. As an educator, he has presented over 100 master classes around the world, developed many multi-media educational series, and served on the faculty of the University of Washington and the Cornish College of the Arts.

Professor of Clarinet at Seattle Pacific Universty, Mary Kantor received her Bachelor of Music degree from the University of Washington and graduated from the Academy of Music in Vienna with Honors in clarinet performance, class of Rudolf Jettel. As a soloist, she has performed the Mozart Concerto and Richard Strauss’ Duet-Concertino with Philharmonia Northwest.

Recent projects include concerts with the Sound Ensemble, and a new CD with the Seattle Jewish Chorale entitled The Light of Tradition – Hanukkah in the Northwest.

Dr. Florie Rothenberg enjoys an active performing career, playing with several Seattle area concert and pit orchestras, including the Auburn Symphony, Tacoma Symphony, Pacific Northwest Ballet, and Tacoma Opera. She has worked in film scoring in Seattle, and has her own CD, Voices of Trees, Modern Works by Women Composers for Clarinet and Piano, available on Origin Classical Records. 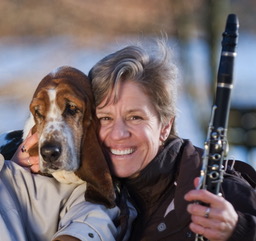 Dash Point native Jennifer Nelson is currently Principal Clarinet with the Pacific Northwest Ballet and the Auburn Symphony Orchestras. She also has a very active freelance career, including playing Broadway-style shows at the Fifth Avenue and Paramount Theaters, extra with the Seattle Symphony and Opera Orchestras, and recordings for various television, motion picture, and video game scores.

She is also Affiliate Artist Faculty in Clarinet at the University of Puget Sound, in addition to having several students in her private studio in Seattle for many years. Ms. Nelson has also traveled throughout the United States with the national touring companies of Phantom of the Opera and New York City Opera. In addition to her stateside concerts, Jennifer’s orchestral and recital performances have also taken her to Mexico, Japan, Germany, Liechtenstein, Austria, Honduras, and most recently, India.

A master class is like a public lesson. Participants perform music for the “master” and get critiques and suggestions that the audience may also benefit from hearing. For example: at Clarinettissimo, a special guest is the master and participants may play orchestral excerpts, solos (with or without accompaniment), or other music. If the master feels there is room for improvement with breathing, finger position, or something else, they will work with the participant to improve, all the while relating this instruction to the audience. Audiences at master classes often take notes.